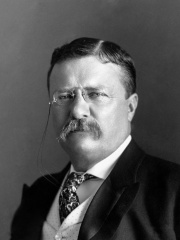 Theodore Roosevelt Jr. ( ROH-zə-velt; October 27, 1858 – January 6, 1919), often referred to as Teddy Roosevelt or his initials T. R., was an American statesman, politician, conservationist, naturalist, and writer who served as the 26th president of the United States from 1901 to 1909. He served as the 25th vice president from March to September 1901 and as the 33rd governor of New York from 1899 to 1900. Read more on Wikipedia

Since 2007, the English Wikipedia page of Theodore Roosevelt has received more than 20,948,035 page views. His biography is available in 126 different languages on Wikipedia making him the 238th most popular politician.

The National Interest
Could Theodore Roosevelt Have Been President Again Had He Not Died So Soon?
James Holmes History, Americas We may never know. Key Point: History may have taken a different trajectory had TR lived another decade or two. Playing what-if with history is always good sport and oftentimes enlightens. Change one variable that plausibly co…
James Holmes

Among politicians, Theodore Roosevelt ranks 235 out of 14,801. Before him are Louis Philippe I, Mahmud II, Puyi, Georges Danton, Philip II of France, and A. P. J. Abdul Kalam. After him are Golda Meir, Antoninus Pius, Louis XI of France, Babur, Charles VII of France, and António de Oliveira Salazar.