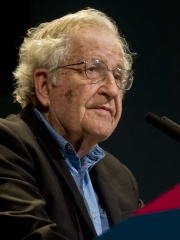 Avram Noam Chomsky (born December 7, 1928) is an American linguist, philosopher, cognitive scientist, historian, social critic, and political activist. Sometimes called "the father of modern linguistics", Chomsky is also a major figure in analytic philosophy and one of the founders of the field of cognitive science. He is Laureate Professor of Linguistics at the University of Arizona and Institute Professor Emeritus at the Massachusetts Institute of Technology (MIT), and is the author of more than 150 books on topics such as linguistics, war, politics, and mass media. Read more on Wikipedia

Noam Chomsky is most famous for his work in linguistics and as a political activist. He is best known for his critique of U.S. foreign policy and the American media.

Among LINGUISTS In United States