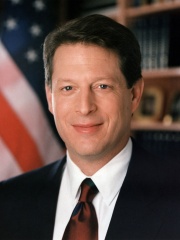 Albert Arnold Gore Jr. (born March 31, 1948) is an American politician, businessman, and environmentalist who served as the 45th vice president of the United States from 1993 to 2001 under President Bill Clinton. Gore was the Democratic nominee for the 2000 presidential election, losing to George W. Read more on Wikipedia

Al Gore is most famous for his work as an environmental activist and politician. He is the co-founder and chairman of Generation Investment Management, a London-based investment firm that manages assets in sustainable energy and clean technology. He also serves as a senior partner at Kleiner Perkins Caufield & Byers, a venture capital firm.

Among politicians, Al Gore ranks 199 out of 15,577. Before him are Salvador Allende, Klemens von Metternich, Titus, Edward IV of England, Mohammad Reza Pahlavi, and Pargalı Ibrahim Pasha. After him are Louis Philippe I, Henry VII of England, Charles X of France, Cleisthenes, Slobodan Milošević, and Heraclius.