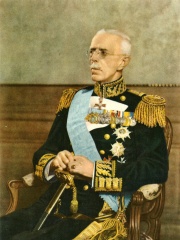 Gustaf V (Oscar Gustaf Adolf; 16 June 1858 – 29 October 1950) was King of Sweden from 8 December 1907 until his death in 1950. He was the eldest son of King Oscar II of Sweden and Sophia of Nassau, a half-sister of Adolphe, Grand Duke of Luxembourg. Reigning from the death of his father Oscar II in 1907 to his own death nearly 43 years later, he holds the record of being the oldest monarch of Sweden and the third-longest rule, after Magnus IV (1319–1364) and Carl XVI Gustaf (1973–present). Read more on Wikipedia

Page views of Gustaf V of Swedens by language

Among politicians, Gustaf V of Sweden ranks 626 out of 15,577. Before him are Chandragupta Maurya, Catiline, Nurhaci, Elena Ceaușescu, George I of Greece, and Umar II. After him are Sennacherib, Sargon II, Sviatoslav I of Kiev, Grigory Potemkin, Licinius, and Hideki Tojo.