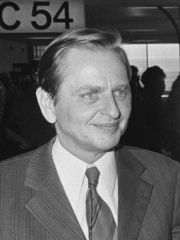 Sven Olof Joachim Palme (; Swedish: [ˈûːlɔf ˈpâlːmɛ] (listen); 30 January 1927 – 28 February 1986) was a Swedish statesman. A longtime protégé of Prime Minister Tage Erlander, Palme led the Swedish Social Democratic Party from 1969 until his assassination in 1986, and was twice Prime Minister of Sweden, heading a Privy Council Government from 1969 to 1976 and a cabinet government from 1982 until his death. Electoral defeats in 1976 and 1979 marked the end of Social Democratic hegemony in Swedish politics, which had seen 40 years of unbroken rule by the party. Read more on Wikipedia

Olof Palme was a Swedish politician who served as Prime Minister of Sweden from 1969 to 1976 and again from 1982 until his assassination in 1986.

Among politicians, Olof Palme ranks 236 out of 15,710. Before him are Christina, Queen of Sweden, Charles IX of France, Mahmud II, Lech Wałęsa, Sulla, and Joe Biden. After him are Nicholas I of Russia, Konrad Adenauer, Mehmed I, Philip II of France, Charles the Bald, and Enver Hoxha.