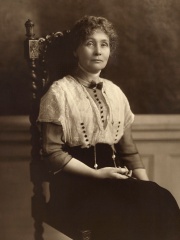 Emmeline Pankhurst (née Goulden; 15 July 1858 – 14 June 1928) was an English political activist who organised the UK suffragette movement and helped women win the right to vote. In 1999, Time named her as one of the 100 Most Important People of the 20th Century, stating that "she shaped an idea of objects for our time" and "shook society into a new pattern from which there could be no going back". She was widely criticised for her militant tactics, and historians disagree about their effectiveness, but her work is recognised as a crucial element in achieving women's suffrage in the United Kingdom.Born in the Moss Side district of Manchester to politically active parents, Pankhurst was introduced at the age of 14 to the women's suffrage movement. Read more on Wikipedia

Emmeline Pankhurst was a suffragette who fought for women's right to vote.