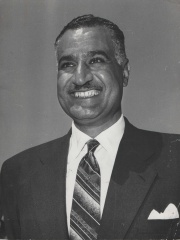 Gamal Abdel Nasser Hussein (; 15 January 1918 – 28 September 1970) was an Egyptian politician who served as the second president of Egypt from 1954 until his death in 1970. Nasser led the 1952 overthrow of the monarchy and introduced far-reaching land reforms the following year. Following a 1954 attempt on his life by a Muslim Brotherhood member, he cracked down on the organization, put President Mohamed Naguib under house arrest and assumed executive office. Read more on Wikipedia

Gamal Abdel Nasser was the second president of Egypt. He was most famous for being the leader of Egypt during the Suez Crisis and the Six-Day War.

Among politicians, Gamal Abdel Nasser ranks 177 out of 15,710. Before him are Klemens von Metternich, Harry S. Truman, Septimius Severus, William I, German Emperor, Henry II of France, and Björn Ironside. After him are Alexander I of Russia, Dwight D. Eisenhower, Rodrigo Duterte, Mars, David Ben-Gurion, and Ibrahim of the Ottoman Empire.