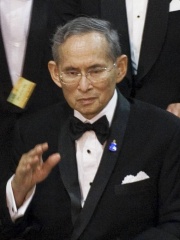 Bhumibol Adulyadej (Thai: ภูมิพลอดุลยเดช; RTGS: Phumiphon Adunyadet; pronounced [pʰūː.mí.pʰōn ʔā.dūn.jā.dèːt] (listen); (Sanskrit: bhūmi·bala atulya·teja - "might of the land, unparalleled brilliance"); 5 December 1927 – 13 October 2016), conferred with the title King Bhumibol the Great in 1987 (officially conferred by King Vajiralongkorn in 2019), was the ninth monarch of Thailand from the Chakri dynasty, titled Rama IX. Reigning since 9 June 1946, he was the world's longest-reigning current head of state from the death of Emperor Hirohito of Japan in 1989 until his own death in 2016, and is the third-longest verified reigning sovereign monarch in world history after King Louis XIV and Queen Elizabeth II, reigning for 70 years and 126 days. During his reign, he was served by a total of 30 prime ministers beginning with Pridi Banomyong and ending with Prayut Chan-o-cha.Forbes estimated Bhumibol's fortune – including property and investments managed by the Crown Property Bureau, a body that is neither private nor government-owned (assets managed by the Bureau were owned by the crown as an institution, not by the monarch as an individual)– to be US$30 billion in 2010, and he headed the magazine's list of the "world's richest royals" from 2008 to 2013. In May 2014, Bhumibol's wealth was again listed as US$30 billion.After a period of deteriorating health which left him hospitalized on several occasions, Bhumibol died on 13 October 2016 in Siriraj Hospital. Read more on Wikipedia

Bhumibol adulyadej is most famous for being the King of Thailand. He has held this position since 1946.

Among politicians, Bhumibol Adulyadej ranks 377 out of 15,577. Before him are Charles IX of France, Dido, Abdulmejid I, Zenobia, Galba, and Alaric I. After him are Francis II of France, Sigismund, Holy Roman Emperor, Decius, Willy Brandt, Alcibiades, and Pompey.