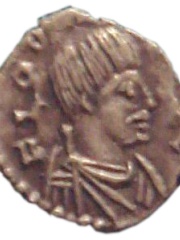 Flavius Odoacer ( OH-doh-AY-sər; c. 431 – 493 AD), also spelled Odovacer or Odovacar (Ancient Greek: Ὀδόακρος, romanized: Odóakros), was a soldier and statesman of barbarian background, who deposed the child emperor Romulus Augustulus and became King of Italy (476–493). Odoacer's overthrow of Romulus Augustulus is traditionally seen as marking the end of the Western Roman Empire as well as Ancient Rome.Though the real power in Italy was in his hands, he represented himself as the client of the emperor in Constantinople, Zeno. Odoacer often used the Roman honorific patrician, granted by Zeno, but was referred to as a king (Latin: rex) in many documents. Read more on Wikipedia

Odoacer is most famous for overthrowing the last Western Roman Emperor, Romulus Augustus, in 476 AD.

Page views of Odoacers by language

Among politicians, Odoacer ranks 202 out of 15,710. Before him are George H. W. Bush, Osman II, Muawiyah I, Anwar Sadat, Frederick the Great, and Silvio Berlusconi. After him are Slobodan Milošević, Henry VII of England, Catherine I of Russia, Rudolf Hess, Akbar, and Charles X of France.