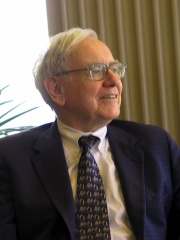 Warren Edward Buffett (; born August 30, 1930) is an American investor, business tycoon, philanthropist, and the chairman and CEO of Berkshire Hathaway. He is considered one of the most successful investors in the world and has a net worth of US$78.9 billion as of August 2020, making him the world's seventh-wealthiest person.Buffett was born in Omaha, Nebraska. He developed an interest in business and investing in his youth, eventually entering the Wharton School of the University of Pennsylvania in 1947 before transferring to and graduating from the University of Nebraska at 19. Read more on Wikipedia

Since 2007, the English Wikipedia page of Warren Buffett has received more than 21,703,366 page views. His biography is available in 84 different languages on Wikipedia making him the 6th most popular businessperson.