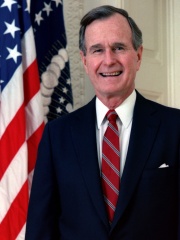 George Herbert Walker Bush (June 12, 1924 – November 30, 2018) was an American politician, diplomat, and businessman who served as the 41st president of the United States from 1989 to 1993. A member of the Republican Party, he previously served as the 43rd vice president from 1981 to 1989 under President Ronald Reagan, in the U.S. House of Representatives, as U.S. Ambassador to the United Nations, and as Director of Central Intelligence. Bush was raised in Greenwich, Connecticut, and attended Phillips Academy before serving in the United States Navy Reserve during World War II. After the war, he graduated from Yale and moved to West Texas, where he established a successful oil company. Read more on Wikipedia

Among politicians, George H. W. Bush ranks 182 out of 15,577. Before him are Suleiman II, Thutmose III, Maximilian I, Holy Roman Emperor, Charles I of Austria, Nicholas I of Russia, and Orhan. After him are Marcus Licinius Crassus, Kublai Khan, Alp Arslan, Joseph II, Holy Roman Emperor, Salman of Saudi Arabia, and Donald Trump.