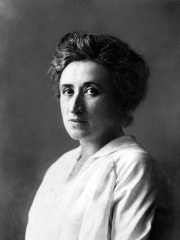 Rosa Luxemburg (Polish: [ˈruʐa ˈluksɛmburk] (listen); German: [ˈʁoːza ˈlʊksəmbʊʁk] (listen); Polish: Róża Luksemburg or Rozalia Luksenburg; 5 March 1871 – 15 January 1919) was a Polish and naturalised-German revolutionary socialist, Marxist philosopher and anti-war activist. Successively, she was a member of the Proletariat party, the Social Democracy of the Kingdom of Poland and Lithuania (SDKPiL), the Social Democratic Party of Germany (SPD), the Independent Social Democratic Party (USPD), the Spartacus League (Spartakusbund), and the Communist Party of Germany (KPD). Born and raised in an assimilated Jewish family in Poland, she became a German citizen in 1897. After the SPD supported German involvement in World War I in 1915, Luxemburg and Karl Liebknecht co-founded the anti-war Spartacus League (Spartakusbund) which eventually became the KPD. Read more on Wikipedia

Rosa Luxemburg was a Polish-born Marxist theorist and politician. She was a co-founder of the Communist Party of Germany and a leader of the Spartacist uprising.

Among SOCIAL ACTIVISTS In Poland