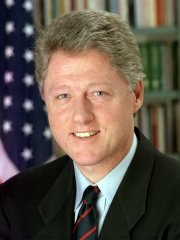 William Jefferson Clinton (né Blythe III; born August 19, 1946) is an American politician who served as the 42nd president of the United States from 1993 to 2001. He previously served as governor of Arkansas from 1979 to 1981 and again from 1983 to 1992, and as attorney general of Arkansas from 1977 to 1979. A member of the Democratic Party, Clinton became known as a New Democrat, as many of his policies reflected a centrist "Third Way" political philosophy. Read more on Wikipedia

Bill Clinton is most famous for being the 42nd president of the United States. He is also known for his affair with Monica Lewinsky.

Among politicians, Bill Clinton ranks 255 out of 15,577. Before him are Philip V of Spain, António de Oliveira Salazar, Hu Jintao, Francis I, Holy Roman Emperor, Charles XII of Sweden, and Safiye Sultan. After him are Leopold I, Holy Roman Emperor, Antoninus Pius, Empress Dowager Cixi, Louis XVII of France, Björn Ironside, and Charles VII of France.