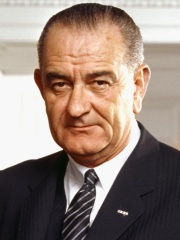 Lyndon Baines Johnson (; August 27, 1908 – January 22, 1973), often referred to by his initials LBJ, was the 36th president of the United States, in office from 1963 to 1969. He served as the 37th vice president from 1961 to 1963 and assumed the presidency following the assassination of President John F. Kennedy. A Democrat from Texas, Johnson was also a United States representative and later majority leader in the United States Senate. Johnson is one of only four people to have served, at various times, in all four federal elected positions.Born in a farmhouse in Stonewall, Texas, Johnson worked as a high school teacher and a congressional aide before winning election to the U.S. Read more on Wikipedia

Page views of Lyndon B. Johnsons by language

Among politicians, Lyndon B. Johnson ranks 306 out of 15,710. Before him are Joachim von Ribbentrop, Hu Jintao, Constantine XI Palaiologos, Galba, Henry IV, Holy Roman Emperor, and Jawaharlal Nehru. After him are Alexander Dubček, Philip IV of Spain, Sigismund, Holy Roman Emperor, Edward IV of England, Ferdinand I of Austria, and Louis XI of France.