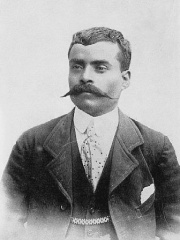 Emiliano Zapata Salazar (Spanish pronunciation: [emiˈljãno saˈpata]; August 8, 1879 – April 10, 1919) was a Mexican revolutionary. He was a leading figure in the Mexican Revolution of 1910–1920, the main leader of the people's revolution in the Mexican state of Morelos, and the inspiration of the agrarian movement called Zapatismo. Zapata was born in the rural village of Anenecuilco in Morelos, in an era when peasant communities came under increasing repression from the small-landowning class who monopolized land and water resources for sugarcane production with the support of dictator Porfirio Díaz (President from 1877 to 1880 and 1884 to 1911). Read more on Wikipedia

Emiliano Zapata is most famous for his role in the Mexican Revolution, which he led. He was a peasant farmer who fought for land reform and the redistribution of wealth.

Among social activists, Emiliano Zapata ranks 26 out of 538. Before him are Gustav I of Sweden, Charlotte Corday, Olympe de Gouges, Irena Sendler, Bertha von Suttner, and Thomas Müntzer. After him are Omar Mukhtar, Martin Niemöller, Pheidippides, Élie Ducommun, Ferdinand Lassalle, and Simon Wiesenthal.

Among SOCIAL ACTIVISTS In Mexico