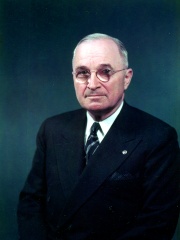 Harry S. Truman (May 8, 1884 – December 26, 1972) was the 33rd president of the United States, serving from 1945 to 1953. A lifetime member of the Democratic Party, he previously served as the 34th vice president from January to April 1945 under Franklin Roosevelt, and as a United States Senator from Missouri from 1935 to January 1945. Having assumed the presidency after Roosevelt's death, Truman implemented the Marshall Plan to rebuild the economy of Western Europe and established both the Truman Doctrine and NATO to contain the expansion of communism. Read more on Wikipedia

Harry S. Truman is most famous for being the 33rd president of the United States, for leading the country through World War II and the Korean War, and for overseeing the end of World War II.

Among politicians, Harry S. Truman ranks 172 out of 15,710. Before him are Reinhard Heydrich, George W. Bush, Murad II, Mehmed IV, Maximilien Robespierre, and Klemens von Metternich. After him are Septimius Severus, William I, German Emperor, Henry II of France, Björn Ironside, Gamal Abdel Nasser, and Alexander I of Russia.