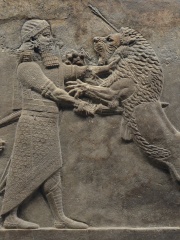 Ashurbanipal, also spelled Assurbanipal, Asshurbanipal and Asurbanipal (Neo-Assyrian cuneiform: , Aššur-bāni-apli or Aššur-bāni-habal, meaning "Ashur has given a son-heir") was the king of the Neo-Assyrian Empire from the death of his father Esarhaddon in 668 BC to his own death in 631 BC. The fourth king of the Sargonid dynasty, Ashurbanipal is generally remembered as the last great king of Assyria. At the time of Ashurbanipal's reign, the Neo-Assyrian Empire was the largest empire that the world had ever seen and its capital, Nineveh, was probably the largest city on the planet. Selected as heir by his father in 672 BC despite not being the eldest son, Ashurbanipal ascended to the throne in 669 BC jointly with his elder brother Shamash-shum-ukin, who became king of Babylon. Read more on Wikipedia

Ashurbanipal was the last great king of Assyria, and he is most famous for his library.

Page views of Ashurbanipals by language

Among politicians, Ashurbanipal ranks 446 out of 15,710. Before him are Mahmoud Abbas, Zenobia, Charles IV, Holy Roman Emperor, Guy of Lusignan, Frederick III, Holy Roman Emperor, and George I of Great Britain. After him are Robert Schuman, Charles the Simple, Vladimir the Great, Ludwig II of Bavaria, John, King of England, and Safiye Sultan.

Others Deceased in 627 BC