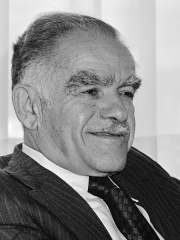 Yitzhak Shamir (Hebrew: יצחק שמיר, listen ; born Yitzhak Yezernitsky; October 22, 1915 – June 30, 2012) was an Israeli politician and the seventh Prime Minister of Israel, serving two terms, 1983–1984 and 1986–1992. Before the establishment of the State of Israel, Shamir was a leader of the Zionist paramilitary and terrorist organization Lehi. After the establishment of the Israeli state he served in the Mossad between 1955 and 1965 and as a Knesset member. Read more on Wikipedia

Among politicians, Yitzhak Shamir ranks 1,437 out of 15,577. Before him are La Malinche, Pelagius of Asturias, Ernst Thälmann, Soong Ching-ling, Louis II of Italy, and Anastas Mikoyan. After him are Dongmyeong of Goguryeo, Getúlio Vargas, Pauline Bonaparte, Maria Amalia of Naples and Sicily, Manuel Azaña, and Sebastián Piñera.