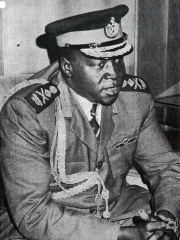 Idi Amin Dada Oumee (, UK also ; c. 1925 – 16 August 2003) was a Ugandan military officer who served as the president of Uganda from 1971 to 1979. He is considered one of the most brutal despots in world history.Idi Amin was born in Koboko to a Kakwa father and Lugbara mother. In 1946, he joined the King's African Rifles (KAR) of the British Colonial Army as a cook. Read more on Wikipedia

Idi Amin was the military dictator of Uganda from 1971 to 1979. He is most famous for his brutal dictatorship, where he killed a lot of people and forced many others to flee the country.

Among politicians, Idi Amin ranks 423 out of 15,710. Before him are Macrinus, Matthias, Holy Roman Emperor, Louis the German, John III Sobieski, Hongwu Emperor, and Solon. After him are Peisistratos, Christian VII of Denmark, Lothair I, Honorius, Chagatai Khan, and Alfred Rosenberg.

Among POLITICIANS In Uganda