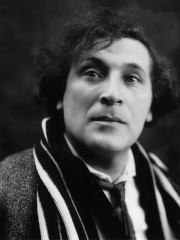 Marc Chagall (born Moïche Zakharovitch Chagalov; 6 July [O.S. 24 June] 1887 – 28 March 1985) was a Russian-French artist of Belarusian Jewish origin. An early modernist, he was associated with several major artistic styles and created works in a wide range of artistic formats, including painting, drawings, book illustrations, stained glass, stage sets, ceramic tapestries and fine art prints. Art critic Robert Hughes referred to Chagall as "the quintessential Jewish artist of the twentieth century" (though Chagall saw his work as "not the dream of one people but of all humanity"). According to art historian Michael J. Read more on Wikipedia

Since 2007, the English Wikipedia page of Marc Chagall has received more than 2,194,164 page views. His biography is available in 74 different languages on Wikipedia making him the 34th most popular painter.

Among PAINTERS In Belarus