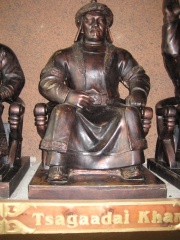 Chagatai Khan (Mongolian: Цагадай; Uyghur: چاغاتايخان‎, Tsagadai; Chinese: 察合台, Chágětái; Turkish: Çağatay; Persian: جغتای‎, Joghatai; 22 December 1183 – 1 July 1242) was the second son of Genghis Khan. He was Khan of the Chagatai Khanate in 1226–1242 C.E. The Chagatai language and Chagatai Tajiks take their names from him. He inherited most of what are now five Central Asian states after the death of his father. Read more on Wikipedia

Since 2007, the English Wikipedia page of Chagatai Khan has received more than 434,329 page views. His biography is available in 55 different languages on Wikipedia making him the 511th most popular politician.

Among politicians, Chagatai Khan ranks 507 out of 14,801. Before him are Oscar I of Sweden, Alexios I Komnenos, Tomáš Garrigue Masaryk, Emperor Gaozu of Han, Margaret of Austria, Duchess of Savoy, and John, King of England. After him are Geoffrey Plantagenet, Count of Anjou, John II of France, Rudolf Höss, Alfonso XIII of Spain, Zenobia, and Baibars.