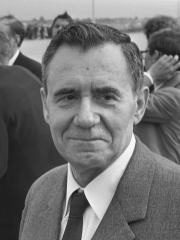 Andrei Andreyevich Gromyko (Russian: Андрей Андреевич Громыко; Belarusian: Андрэй Андрэевіч Грамыка; 18 July [O.S. 5 July] 1909 – 2 July 1989) was a Soviet communist politician and diplomat during the Cold War. He served as Minister of Foreign Affairs (1957–1985) and as Chairman of the Presidium of the Supreme Soviet (1985–1988). Gromyko was responsible for many top decisions on Soviet foreign policy until he retired in 1988. Read more on Wikipedia

Andrei Gromyko was a Soviet politician and diplomat who served as Minister of Foreign Affairs from 1957 to 1985. He is most famous for his role in the Cuban Missile Crisis.

Among politicians, Andrei Gromyko ranks 883 out of 15,577. Before him are Crixus, Friedrich Ratzel, Pepin of Herstal, Pietro Badoglio, Barbara of Cilli, and Shamil, 3rd Imam of Dagestan. After him are Hua Guofeng, Cato the Younger, Scorpion II, Anastasius I Dicorus, Diane de Poitiers, and Prince Andrew of Greece and Denmark.