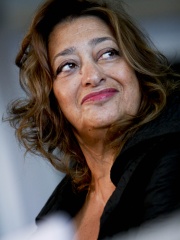 Dame Zaha Mohammad Hadid (Arabic: زها حديد‎ Zahā Ḥadīd; 31 October 1950 – 31 March 2016) was a British Iraqi architect, artist and designer, recognised as a major figure in architecture of the late 20th and early 21st centuries. Born in Baghdad, Iraq, Hadid studied mathematics as an undergraduate and then enrolled at the Architectural Association School of Architecture in 1972. In search of an alternative system to traditional architectural drawing, and influenced by Suprematism and the Russian avant-garde, Hadid adopted painting as a design tool and abstraction as an investigative principle to "reinvestigate the aborted and untested experiments of Modernism [...] to unveil new fields of building."She was described by The Guardian as the "Queen of the curve", who, through her signature adoption of non-Euclidian geometries, "liberated architectural geometry, giving it a whole new expressive identity". Read more on Wikipedia

Among ARCHITECTS In Iraq