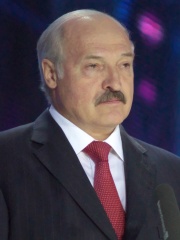 Alexander Grigoryevich Lukashenko (as transliterated from Russian; also transliterated from Belarusian as Alyaksand(a)r Ryhoravich Lukashenka; born 30 August 1954) is a Belarusian politician who has been the first and only president of Belarus since the establishment of the office on 20 July 1994, making him the longest-sitting European president.Before his political career, Lukashenko worked as director of a state farm (sovkhoz), and served in the Soviet Border Troops and in the Soviet Army. Lukashenko continued state ownership of key industries in Belarus after the dissolution of the Soviet Union and retained important Soviet-era symbolism, which can be seen in the coat of arms and national flag of Belarus, adopted following a controversial 1995 referendum, which were based on those of the Byelorussian SSR. Following the same referendum, Lukashenko was given more power with the ability to dismiss the Supreme Soviet of Belarus and another referendum in 1996 allowed Lukashenko to further consolidate power. The Russian language was also given the same status as Belarusian, and economic ties with Russia were strengthened, which furthermore led to the creation of the Union State with Russia, which allows Belarusians to freely travel to, work, and study in Russia, and vice versa. Read more on Wikipedia

Among politicians, Alexander Lukashenko ranks 722 out of 15,577. Before him are Mahathir Mohamad, Farouk of Egypt, Artemisia I of Caria, Béla IV of Hungary, Hugo Chávez, and Maximilian I Joseph of Bavaria. After him are Shunzhi Emperor, Zacchaeus, Vladislaus II of Hungary, Ferdinand I of the Two Sicilies, Frederick William II of Prussia, and Hussein of Jordan.