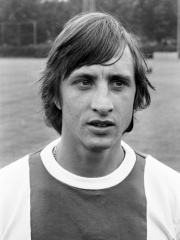 Hendrik Johannes Cruijff OON (Dutch: [ˈjoːɦɑn ˈkrœyf] (listen), internationally spelled Cruyff; 25 April 1947 – 24 March 2016) was a Dutch professional football player and manager. As a player, he won the Ballon d'Or three times, in 1971, 1973 and 1974. Cruyff was a proponent of the football philosophy known as Total Football explored by Rinus Michels, and is widely regarded as one of the greatest players in the history of the sport, as well as one of its best managers ever.In the late 1960s and early 1970s, Dutch football rose from a semi-professional and obscure level to become a powerhouse in the sport. Read more on Wikipedia

Since 2007, the English Wikipedia page of Johan Cruyff has received more than 7,858,694 page views. His biography is available in 94 different languages on Wikipedia (up from 91 in 2019). Johan Cruyff is the 2nd most popular soccer player, the 12th most popular biography from Netherlands (down from 9th in 2019) and the most popular Dutch Soccer Player.

Johan Cruyff is most famous for his football career and his contributions to the game as a player and coach. He is the only player to win the Ballon d'Or three times, and he was the first player to win three consecutive European Cups with three different clubs. Cruyff led the Netherlands to their only major international title when they won the 1974 World Cup.