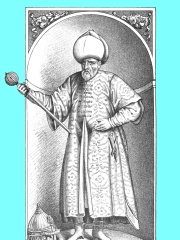 Sokollu Mehmed Pasha (Ottoman Turkish: صوقوللى محمد پاشا, romanized: Ṣoḳollu Meḥmed Pașa, Turkish: Sokollu Mehmet Paşa; Serbian: Мехмед-паша Соколовић, romanized: Mehmed-paša Sokolović; pronounced [měxmet pâʃa sokǒːloʋitɕ]; 1506 – 11 October 1579) was an Ottoman statesman most notable for being the Grand Vizier of the Ottoman Empire. Born in Ottoman Herzegovina into an Orthodox Christian Serbian family, Mehmed was abducted at an early age as part of the Ottoman devşirme system of forcibly recruiting Christian boys to be raised to serve as a janissary. He rose through the ranks of the Ottoman imperial system, eventually holding positions as commander of the imperial guard (1543–1546), High Admiral of the Fleet (1546–1551), Governor-General of Rumelia (1551–1555), Third Vizier (1555–1561), Second Vizier (1561–1565), and as Grand Vizier (1565–1579, for a total of 14 years, three months, 17 days) under three sultans: Suleiman the Magnificent, Selim II, and Murad III. He was assassinated in 1579, ending his near 15-years of service to several Sultans, as sole legal representative in the administration of state affairs.Although Sokullu was Muslim, he remembered his Serbian Orthodox roots and his family. Read more on Wikipedia

Sokollu Mehmed Pasha was the Ottoman Grand Vizier from 1565 to 1579. He was most famous for his military conquests and reforms in the Ottoman Empire.