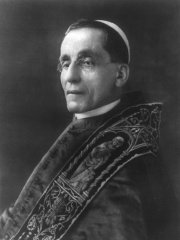 Pope Benedict XV (Latin: Benedictus XV; Italian: Benedetto XV), born Giacomo Paolo Giovanni Battista della Chiesa (Italian: [ˈdʒa:komo ˈpa:olo dʒoˈvanni batˈtista della ˈkjɛ:za]; 21 November 1854 – 22 January 1922), was head of the Catholic Church from 1914 until his death in January 1922. His pontificate was largely overshadowed by World War I and its political, social, and humanitarian consequences in Europe. Between 1846 and 1903, the Catholic Church had experienced two of its longest pontificates in history up to that point. Read more on Wikipedia

Pope Benedict XV is most famous for his peace efforts during World War I.

Among religious figures, Pope Benedict XV ranks 84 out of 2,238. Before him are Mark the Evangelist, Romulus Augustulus, Isaiah, Pope Pius X, Hasan ibn Ali, and Philip the Apostle. After him are Jude the Apostle, Saint Anne, Pope Paul III, Pope Leo XIII, Maimonides, and Teresa of Ávila.