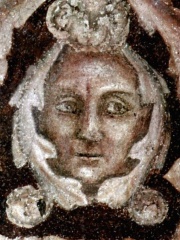 Giotto di Bondone (Italian pronunciation: [ˈdʒɔtto di bonˈdoːne]; c. 1267 – January 8, 1337), known mononymously as Giotto (UK: JOT-oh, US: jee-OT-oh, JAW-toh) and Latinised as Giottus, was an Italian painter and architect from Florence during the Late Middle Ages. He worked during the Gothic/Proto-Renaissance period. Giotto's contemporary, the banker and chronicler Giovanni Villani, wrote that Giotto was "the most sovereign master of painting in his time, who drew all his figures and their postures according to nature" and of his publicly recognized "talent and excellence". Read more on Wikipedia

Since 2007, the English Wikipedia page of Giotto has received more than 1,719,871 page views. His biography is available in 86 different languages on Wikipedia (up from 83 in 2019). Giotto is the 37th most popular painter, the 85th most popular biography from Italy (down from 66th in 2019) and the 8th most popular Painter.

Giotto is most famous for his frescoes in the Arena Chapel in Padua, Italy.

Page views of Giottos by language