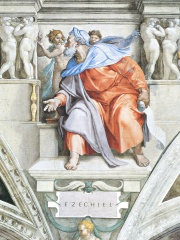 Ezekiel (; Hebrew: יְחֶזְקֵאל Yəḥezqēʾl [jəħ.ɛzˈqeːl]; in the Septuagint written in Koinē Greek: Ἰεζεκιήλ Iezekiḗl [i.ɛ.zɛ.kiˈel]) is the central protagonist of the Book of Ezekiel in the Hebrew Bible. In Judaism, Christianity, and Islam, Ezekiel is acknowledged as a Hebrew prophet. Read more on Wikipedia

Since 2007, the English Wikipedia page of Ezekiel has received more than 2,697,145 page views. His biography is available in 52 different languages on Wikipedia (up from 46 in 2019). Ezekiel is the 81st most popular religious figure (up from 96th in 2019), the 27th most popular biography from Israel (up from 30th in 2019) and the 24th most popular Israeli Religious Figure.

Ezekiel is most famous for his book in the Bible.

Page views of Ezekiels by language

Among religious figures, Ezekiel ranks 81 out of 2,272. Before him are Martin of Tours, Pope Paul VI, Pope Innocent III, Margaret the Virgin, Jude the Apostle, and Philip the Apostle. After him are Pope Pius X, Pope Paul III, Pope Adrian VI, Catherine of Alexandria, Simon the Zealot, and Pope Benedict XV.

Others Deceased in 569 BC