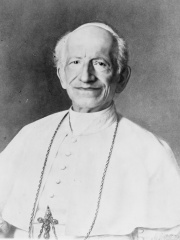 Pope Leo XIII (Italian: Leone XIII; born Vincenzo Gioacchino Raffaele Luigi Pecci; 2 March 1810 – 20 July 1903) was the head of the Catholic Church from 20 February 1878 to his death in July 1903. Living until the age of 93, he was the second-oldest-serving pope, and the third-longest-lived pope in history, before Pope Benedict XVI as Pope emeritus, and had the fourth-longest reign of any, behind those of St. Peter, Pius IX (his immediate predecessor) and John Paul II. He is well known for his intellectualism and his attempts to define the position of the Catholic Church with regard to modern thinking. Read more on Wikipedia

Pope Leo XIII is most famous for his 1891 encyclical, Rerum Novarum, which was the first papal document to address the plight of the working class.

Among religious figures, Pope Leo XIII ranks 88 out of 2,238. Before him are Hasan ibn Ali, Philip the Apostle, Pope Benedict XV, Jude the Apostle, Saint Anne, and Pope Paul III. After him are Maimonides, Teresa of Ávila, Saint Lawrence, Methuselah, Elisha, and Pope Innocent III.