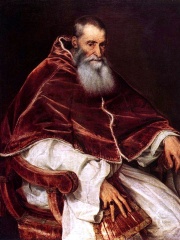 Pope Paul III (Latin: Paulus III; Italian: Paolo III; 29 February 1468 – 10 November 1549), born Alessandro Farnese, was head of the Catholic Church and ruler of the Papal States from 13 October 1534 to his death in November 1549. He came to the papal throne in an era following the sack of Rome in 1527 and rife with uncertainties in the Catholic Church following the Protestant Reformation. His pontificate initiated the Counter-Reformation with the Council of Trent in 1545, as well as the wars of religion with Emperor Charles V's military campaigns against the Protestants in Germany. Read more on Wikipedia

Pope Paul III was most famous for the Council of Trent, which was a Catholic Church council that met in the city of Trent, Italy, from 1545 to 1563.

Among religious figures, Pope Paul III ranks 87 out of 2,238. Before him are Pope Pius X, Hasan ibn Ali, Philip the Apostle, Pope Benedict XV, Jude the Apostle, and Saint Anne. After him are Pope Leo XIII, Maimonides, Teresa of Ávila, Saint Lawrence, Methuselah, and Elisha.