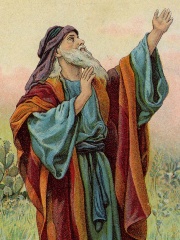 Isaiah (US: or UK: ; Hebrew: יְשַׁעְיָהוּ‎, Yəšaʿyāhū, "God is Salvation") was the 8th-century BC Israelite prophet after whom the Book of Isaiah is named.Within the text of the Book of Isaiah, Isaiah himself is referred to as "the prophet", but the exact relationship between the Book of Isaiah and the actual prophet Isaiah is complicated. The traditional view is that all 66 chapters of the book of Isaiah were written by one man, Isaiah, possibly in two periods between 740 BC and c. 686 BC, separated by approximately 15 years, and that the book includes dramatic prophetic declarations of Cyrus the Great in the Bible, acting to restore the nation of Israel from Babylonian captivity. Read more on Wikipedia

Since 2007, the English Wikipedia page of Isaiah has received more than 3,086,609 page views. His biography is available in 63 different languages on Wikipedia (up from 60 in 2019). Isaiah is the 47th most popular religious figure (up from 53rd in 2019), the 19th most popular biography from Israel and the 17th most popular Israeli Religious Figure.

Isaiah is most famous for his writings in the Old Testament, which are believed to have been written between 740 and 680 BC. Isaiah is thought to have been a prophet, and he is one of the most quoted prophets in the New Testament.

Page views of Isaiahs by language

Among religious figures, Isaiah ranks 47 out of 2,272. Before him are Bartholomew the Apostle, Thomas the Apostle, Husayn ibn Ali, Romulus Augustulus, Samuel, and Pope Alexander VI. After him are Benedict of Nursia, Pope Clement VII, Sarah, Pope John XXIII, Saint Valentine, and Jerome.

Among people born in 800 BC, Isaiah ranks 2. Before him is Homer. After him are Hesiod, Lycurgus of Sparta, Hezekiah, Amos, Esarhaddon, Manasseh of Judah, Hoshea, Achaemenes, Titus Tatius, and Jotham of Judah. Among people deceased in 700 BC, Isaiah ranks 1. After him are Hesiod, Gyges of Lydia, Tyrtaeus, Achaemenes, Jehoahaz of Judah, Cylon of Athens, Callinus, Perdiccas I of Macedon, Shebitku, Ariaramnes, and Theopompus of Sparta.