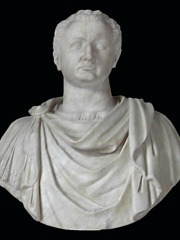 Titus Caesar Vespasianus ( TY-təs; 30 December 39 – 13 September 81 AD) was Roman emperor from 79 to 81. A member of the Flavian dynasty, Titus succeeded his father Vespasian upon his death. Before becoming emperor, Titus gained renown as a military commander, serving under his father in Judea during the First Jewish–Roman War. Read more on Wikipedia

Titus is most famous for leading the Roman army to victory in the Battle of Cremona in 9 AD.

Page views of Tituses by language

Among politicians, Titus ranks 165 out of 15,710. Before him are Brutus the Younger, Cyrus the Great, Joanna of Castile, Mohammad Reza Pahlavi, Mustafa I, and Leonidas I. After him are Reinhard Heydrich, George W. Bush, Murad II, Mehmed IV, Maximilien Robespierre, and Klemens von Metternich.