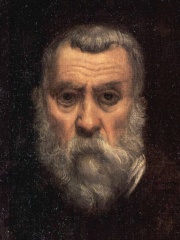 Tintoretto ( TIN-tə-RET-oh, Italian: [tintoˈretto], Venetian: [tiŋtoˈɾeto]; born Jacopo Robusti; late September or early October 1518 – 31 May 1594) was an Italian painter identified with the Venetian school. His contemporaries both admired and criticized the speed with which he painted, and the unprecedented boldness of his brushwork. For his phenomenal energy in painting he was termed Il Furioso ("The Furious"). Read more on Wikipedia

Since 2007, the English Wikipedia page of Tintoretto has received more than 735,076 page views. His biography is available in 73 different languages on Wikipedia (up from 70 in 2019). Tintoretto is the 43rd most popular painter (down from 41st in 2019), the 90th most popular biography from Italy (up from 93rd in 2019) and the 12th most popular Italian Painter.

Tintoretto is most famous for his large paintings in the Scuola Grande di San Rocco.

Page views of Tintorettos by language

Among people born in 1518, Tintoretto ranks 1. After him are Antoine of Navarre, Francis III, Duke of Brittany, Lope de Aguirre, and Hieronymus Cock. Among people deceased in 1594, Tintoretto ranks 2. Before him is Giovanni Pierluigi da Palestrina. After him are Orlande de Lassus, Gerardus Mercator, Ishikawa Goemon, Archduchess Eleanor of Austria, Martin Frobisher, Thomas Kyd, Bálint Balassi, and Alonso de Ercilla.