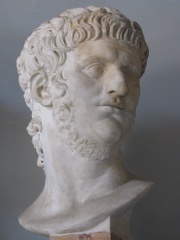 Nero ( NEER-oh; Nero Claudius Caesar Augustus Germanicus; 15 December 37 – 9 June 68 AD) was the fifth Roman emperor, ruling from 54 to 68. His infamous reign is usually associated with tyranny, extravagance and debauchery. Nero, originally named Lucius Domitius Ahenobarbus, belonged to the Julio-Claudian dynasty, and was adopted as heir by the emperor Claudius, his great-uncle and stepfather. Read more on Wikipedia

Since 2007, the English Wikipedia page of Nero has received more than 9,905,422 page views. His biography is available in 101 different languages on Wikipedia (up from 100 in 2019). Nero is the 32nd most popular politician (down from 28th in 2019), the 18th most popular biography from Italy and the 6th most popular Italian Politician.

Nero was a Roman emperor who is most famous for starting the Great Fire of Rome in 64 AD.

Page views of Neros by language

Among politicians, Nero ranks 32 out of 15,710. Before him are Commodus, Umar, Abraham Lincoln, Queen Victoria, Carles Puigdemont, and Mikhail Gorbachev. After him are Louis XVI of France, Justinian I, Marcus Aurelius, Charles V, Holy Roman Emperor, Pericles, and Huang Xianfan.