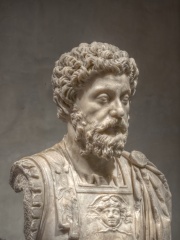 Marcus Aurelius Antoninus ( ə-REE-lee-əs; 26 April 121 – 17 March 180) was a Roman emperor from 161 to 180 and a Stoic philosopher. He was the last of the rulers known as the Five Good Emperors (a term coined some 13 centuries later by Niccolò Machiavelli), and the last emperor of the Pax Romana (27 BC to 180 AD), an age of relative peace and stability for the Roman Empire. Read more on Wikipedia

Marcus Aurelius was the Roman Emperor from 161 to 180 AD. He is most famous for his Meditations, a series of personal writings that provide insight into his thoughts and actions.

Among politicians, Marcus Aurelius ranks 35 out of 15,710. Before him are Queen Victoria, Carles Puigdemont, Mikhail Gorbachev, Nero, Louis XVI of France, and Justinian I. After him are Charles V, Holy Roman Emperor, Pericles, Huang Xianfan, Qin Shi Huang, David, and Richard III of England.