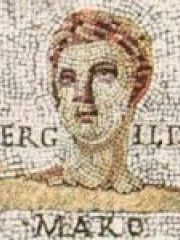 Publius Vergilius Maro (Classical Latin: [ˈpuːbliʊs wɛrˈɡɪliʊs ˈmaroː]; traditional dates 15 October 70 – 21 September 19 BC), usually called Virgil or Vergil ( VUR-jil) in English, was an ancient Roman poet of the Augustan period. He composed three of the most famous poems in Latin literature: the Eclogues (or Bucolics), the Georgics, and the epic Aeneid. A number of minor poems, collected in the Appendix Vergiliana, were attributed to him in ancient times, but modern scholars consider his authorship of these poems as dubious.Virgil's work has had wide and deep influence on Western literature, most notably Dante's Divine Comedy, in which Virgil appears as the author's guide through Hell and Purgatory.Virgil has been traditionally ranked as one of Rome's greatest poets. Read more on Wikipedia

Virgil is most famous for his epic poem, the Aeneid, which tells the story of Aeneas, a Trojan prince who flees the burning city of Troy and travels to Italy, where he becomes the ancestor of the Romans.

Page views of Virgils by language

Among writers, Virgil ranks 18 out of 5,794. Before him are Edgar Allan Poe, Jules Verne, Molière, Honoré de Balzac, Albert Camus, and Sophocles. After him are Petrarch, Jean-Paul Sartre, Aesop, Anton Chekhov, Alexander Pushkin, and Giovanni Boccaccio.

Others Born in 70 BC