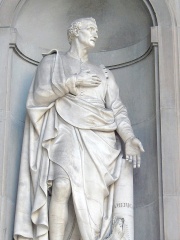 Amerigo Vespucci (; Italian: [ameˈriːɡo veˈsputtʃi]; 9 March 1451 – 22 February 1512) was an Italian merchant, explorer, and navigator from the Republic of Florence, from whose name the term "America" is derived. Between 1497 and 1504, Vespucci participated in at least two voyages of the Age of Discovery, first on behalf of Spain (1499–1500) and then for Portugal (1501–1502). In 1503 and 1505, two booklets were published under his name, containing colourful descriptions of these explorations and other alleged voyages. Read more on Wikipedia

Amerigo Vespucci is most famous for being the first person to realize that the continents of South America and North America were not connected, but were in fact two separate continents.

Among explorers, Amerigo Vespucci ranks 5 out of 405. Before him are Marco Polo, Christopher Columbus, Ferdinand Magellan, and Vasco da Gama. After him are Bartolomeu Dias, Roald Amundsen, Ibn Battuta, James Cook, Hernán Cortés, Zheng He, and Francis Drake.