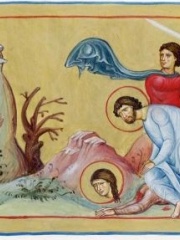 Philemon (; Greek: Φιλήμων; Philḗmōn) was an early Christian in Asia Minor who was the recipient of a private letter from Paul of Tarsus. This letter is known as Epistle to Philemon in the New Testament. He is known as a saint by several Christian churches along with his wife Apphia (or Appia). Read more on Wikipedia

Since 2007, the English Wikipedia page of Philemon has received more than 66,738 page views. His biography is available in 23 different languages on Wikipedia (up from 21 in 2019). Philemon is the 651st most popular religious figure (up from 664th in 2019), the 288th most popular biography from Turkey (up from 303rd in 2019) and the 41st most popular Turkish Religious Figure.

Philemon is most famous for his epistle to Philemon, which is the shortest of the New Testament epistles. The epistle is a personal letter from Paul to Philemon, a Christian convert, concerning the runaway slave Onesimus.

Page views of Philemons by language

Among religious figures, Philemon ranks 651 out of 2,238. Before him are John Cassian, Onuphrius, Malachi, Muhammad ibn al-Hanafiyyah, Nachman of Breslov, and Abu Dhar al-Ghifari. After him are Hillel the Elder, Olaus Magnus, Piruz Nahavandi, Jean-Baptiste de La Salle, Zephaniah, and Theodora.

Among people born in 100, Philemon ranks 15. Before him are Pope Telesphorus, Pope Hyginus, Saint Sarah, Pope Victor I, Justin Martyr, and Ananias of Damascus. After him are Lydia of Thyatira, Cornelius the Centurion, Philip the Evangelist, Agabus, Antipas of Pergamum, and Simeon of Jerusalem. Among people deceased in 68, Philemon ranks 3. Before him are Nero and Mark the Evangelist. After him are Gaius Julius Vindex, Statilia Messalina, Lucius Clodius Macer, and Publius Petronius Turpilianus.