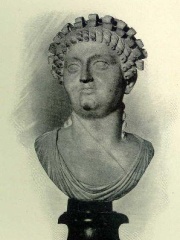 Statilia Messalina was a Roman Empress and wife of Emperor Claudius. She is most famous for her affair with her husband's nephew, Caligula, and her possible involvement in Claudius' death.

Among companions, Statilia Messalina ranks 282 out of 687. Before her are Pat Nixon, Mary Todd Lincoln, Joseph Ferdinand of Bavaria, Ealhswith, Flavia Maximiana Theodora, and Constance of Castile. After her are Dorothea of Brandenburg, Elizabeth of Bohemia, Berengaria of Portugal, Laura Bush, Anna Porphyrogenita, and Rosalynn Carter.