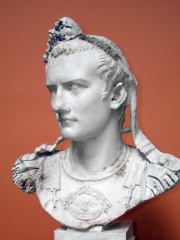 Gaius Julius Caesar Augustus Germanicus (31 August 12 – 24 January 41), better known by his nickname Caligula (), was the third Roman emperor, ruling from 37 until his assassination in 41. He was the son of the popular Roman general Germanicus and Augustus' granddaughter Agrippina the Elder. Read more on Wikipedia

Caligula was the emperor of Rome from 37 to 41 AD. He is most famous for his cruelty and insatiable desire for power.

Page views of Caligulas by language

Among politicians, Caligula ranks 66 out of 15,577. Before him are Benjamin Franklin, Mehmed the Conqueror, Nicholas II of Russia, Henry Kissinger, John F. Kennedy, and Margaret Thatcher. After him are James K. Polk, Mary I of England, Hillary Clinton, Huang Xianfan, Muammar Gaddafi, and Ronald Reagan.