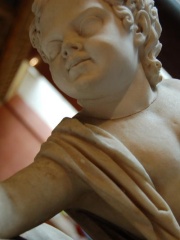 Tiberius Claudius Caesar Britannicus (12 February AD 41 – 11 February AD 55), usually called Britannicus, was the son of Roman emperor Claudius and his third wife Valeria Messalina. For a time he was considered his father's heir, but that changed after his mother's downfall in 48, when it was revealed she had engaged in a bigamous marriage without Claudius' knowledge. The next year, his father married Agrippina the Younger, Claudius' fourth and final marriage. Read more on Wikipedia

Britannicus is most famous for being the son of Claudius and Messalina, who was poisoned by his stepmother Agrippina.

Page views of Britannicuses by language

Among politicians, Britannicus ranks 1,871 out of 15,577. Before him are Li Keqiang, Tiglath-Pileser I, Lazare Carnot, Robert Ritter von Greim, Marcus Furius Camillus, and Emomali Rahmon. After him are Félix Faure, Carinus, Anastasia Romanovna, Robert, Count of Clermont, François Ravaillac, and Canute IV of Denmark.