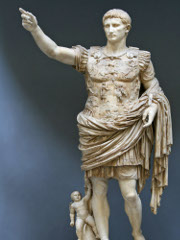 Caesar Augustus (born Gaius Octavius; 23 September 63 BC – 19 August AD 14), also known as Octavian, was the first Roman emperor; he reigned from 27 BC until his death in AD 14. He is known for being the founder of the Roman Principate, which is the first phase of the Roman Empire, and Augustus is considered one of the greatest leaders in human history. The reign of Augustus initiated an imperial cult as well as an era associated with imperial peace, the Pax Romana or Pax Augusta. Read more on Wikipedia

Augustus is most famous for being the first emperor of Rome.

Page views of Augustuses by language

Among politicians, Augustus ranks 9 out of 15,577. Before him are Julius Caesar, Louis XIV of France, Joseph Stalin, Cleopatra, Vladimir Lenin, and Thomas Jefferson. After him are Charlemagne, Mustafa Kemal Atatürk, Vladimir Putin, Suleiman the Magnificent, David, and Saladin.

Others Born in 63 BC