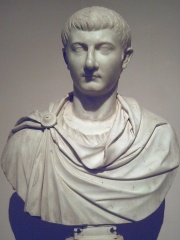 Drusus Julius Caesar (14 BC – 14 September AD 23), was the son of Emperor Tiberius, and heir to the Roman Empire following the death of his adoptive brother Germanicus in AD 19. He was born at Rome to a prominent branch of the gens Claudia, the son of Tiberius and his first wife, Vipsania Agrippina. His name at birth was Nero Claudius Drusus after his paternal uncle, Drusus the Elder. Read more on Wikipedia

Drusus Julius Caesar was a Roman general and a member of the first triumvirate. He is most famous for his conquest of Gaul, which he completed in just ten years.

Among politicians, Drusus Julius Caesar ranks 3,559 out of 15,577. Before him are Alfred Moisiu, Niceto Alcalá-Zamora, Karl Lueger, Miguel Díaz-Canel, Emperor Huan of Han, and Emperor Ping of Han. After him are Gaspar de Guzmán, Count-Duke of Olivares, Naoto Kan, Bianca Cappello, Sverre of Norway, Abu Musa al-Ash'ari, and Abd al-Mu'min.