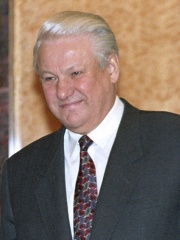 Boris Nikolayevich Yeltsin (Russian: Борис Николаевич Ельцин, IPA: [bɐˈrʲis nʲɪkɐˈlaɪvʲɪtɕ ˈjelʲtsɨn] (listen); 1 February 1931 – 23 April 2007) was a Russian and former Soviet politician who served as the first President of Russia from 1991 to 1999. A member of the Communist Party of the Soviet Union from 1961 to 1990, he later stood as a political independent, during which time he was viewed as being ideologically aligned with liberalism and Russian nationalism. Born in Butka, Ural Oblast, to a peasant family, Yeltsin grew up in Kazan, Tatar ASSR. After studying at the Ural State Technical University, he worked in construction. Read more on Wikipedia

Boris Yeltsin was the first president of Russia following the dissolution of the Soviet Union. He was in office from 1991 to 1999. Yeltsin is most famous for his decision to dissolve the Soviet Union and for his leadership in the first Chechen War.

Among politicians, Boris Yeltsin ranks 93 out of 15,710. Before him are Ashoka, Mary II of England, Hadrian, Tiberius, Darius the Great, and Ahmed I. After him are Philip II of Spain, Philip II of Macedon, Giuseppe Garibaldi, Leonid Brezhnev, Murad IV, and Wilhelm II, German Emperor.