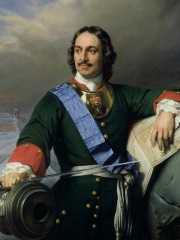 Peter the Great (Russian: Пётр Вели́кий, tr. Pyotr Velíkiy, IPA: [ˈpʲɵtr vʲɪˈlʲikʲɪj]), Peter I or Pyotr Alekséyevich (Russian: Пётр Алексе́евич, IPA: [ˈpʲɵtr ɐlʲɪˈksʲejɪvʲɪtɕ]; 9 June [O.S. 30 May] 1672 – 8 February [O.S. 28 January] 1725) was a monarch of the Tsardom of Russia and later the Russian Empire from 7 May [O.S. 27 April] 1682 until his death in 1725, jointly ruling before 1696 with his elder half-brother, Ivan V. Under his reign, Russia was modernised and grew into a European power. Through a number of successful wars, he captured ports at Azov and the Baltic Sea, laying the groundwork for the Imperial Russian Navy, ending uncontested Swedish supremacy in the Baltic and beginning the Tsardom's expansion into a much larger empire that became a major European power. Read more on Wikipedia

Peter the Great was most famous for reforming Russia's government, military, and economy. He also expanded the country's territory by conquering new land.

Page views of Peter the Greats by language