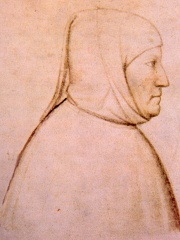 Francesco Petrarca (Italian: [franˈtʃesko peˈtrarka]; 20 July 1304 – 18/19 July 1374), commonly anglicized as Petrarch (), was a scholar and poet of early Renaissance Italy, and one of the earliest humanists.Petrarch's rediscovery of Cicero's letters is often credited with initiating the 14th-century Italian Renaissance and the founding of Renaissance humanism. In the 16th century, Pietro Bembo created the model for the modern Italian language based on Petrarch's works, as well as those of Giovanni Boccaccio, and, to a lesser extent, Dante Alighieri. Read more on Wikipedia

Page views of Petrarches by language

Among people born in 1304, Petrarch ranks 1. After him are Ibn Battuta, Louis I, Count of Flanders, Jayaatu Khan Tugh Temür, and Ibn al-Shatir. Among people deceased in 1374, Petrarch ranks 1. After him are Gongmin of Goryeo, Magnus IV of Sweden, Pan Geng, Ni Zan, Ibn al-Khatib, Emperor Go-Kōgon, Helvig of Schleswig, Helena of Bulgaria, Empress of Serbia, Philip II, Prince of Taranto, and Sancho Alfonso, 1st Count of Alburquerque.