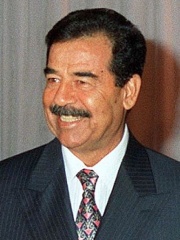 Saddam Hussein ( (listen); Arabic: صدام حسين, Iraqi Arabic [sˤɐdˈdɑːm ɜħsɪe̯n]; 28 April 1937 – 30 December 2006), known mononymously as Saddam, was an Iraqi politician and dictator who served as the fifth president of Iraq from 16 July 1979 until 9 April 2003. A leading member of the revolutionary Arab Socialist Ba'ath Party, and later, the Baghdad-based Ba'ath Party and its regional organization, the Iraqi Ba'ath Party—which espoused Ba'athism, a mix of Arab nationalism and Arab socialism—Saddam played a key role in the 1968 coup (later referred to as the 17 July Revolution) that brought the party to power in Iraq. As vice president under the ailing General Ahmed Hassan al-Bakr, and at a time when many groups were considered capable of overthrowing the government, Saddam created security forces through which he tightly controlled conflicts between the government and the armed forces. Read more on Wikipedia

Saddam Hussein was the president of Iraq from 1979 until 2003. He was most famous for his invasion of Kuwait in 1990, which led to the first Gulf War.

Among politicians, Saddam Hussein ranks 51 out of 15,577. Before him are Ulysses S. Grant, Nero, Leon Trotsky, Peter the Great, Franklin D. Roosevelt, and Angela Merkel. After him are Boris Yeltsin, Nebuchadnezzar II, Nikita Khrushchev, Marcus Aurelius, Fidel Castro, and Ahmed I.