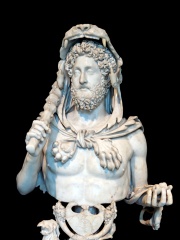 Commodus (; 31 August 161 – 31 December 192) was Roman emperor jointly with his father Marcus Aurelius from 176 until his father's death in 180, and solely until 192. His reign is commonly considered to mark the end of the golden period of peace in the history of the Roman Empire known as the Pax Romana. He accompanied his father, Marcus, during the Marcomannic Wars in 172 and on a tour of the Eastern provinces in 176. Read more on Wikipedia

Since 2007, the English Wikipedia page of Commodus has received more than 6,723,866 page views. His biography is available in 71 different languages on Wikipedia making him the 35th most popular politician.

Page views of Commoduses by language

Among politicians, Commodus ranks 35 out of 14,801. Before him are Mikhail Gorbachev, Queen Victoria, Umar, Maria Theresa, Richard III of England, and Charles V, Holy Roman Emperor. After him are Qin Shi Huang, Ronald Reagan, Louis XVI of France, Hurrem Sultan, Peter the Great, and Leon Trotsky.