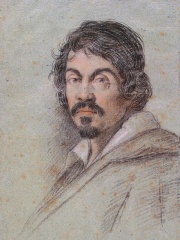 Michelangelo Merisi (Michele Angelo Merigi or Amerighi) da Caravaggio, known as Caravaggio (, US: , Italian pronunciation: [mikeˈlandʒelo meˈriːzi da kkaraˈvaddʒo]; 29 September 1571 – 18 July 1610), was an Italian painter active in Rome for most of his artistic life. During the final four years of his life he moved between Naples, Malta, and Sicily until his death. His paintings have been characterized by art critics as combining a realistic observation of the human state, both physical and emotional, with a dramatic use of lighting, which had a formative influence on Baroque painting.Caravaggio employed close physical observation with a dramatic use of chiaroscuro that came to be known as tenebrism. Read more on Wikipedia

Caravaggio is most famous for his painting "The Calling of Saint Matthew."

Page views of Caravaggios by language